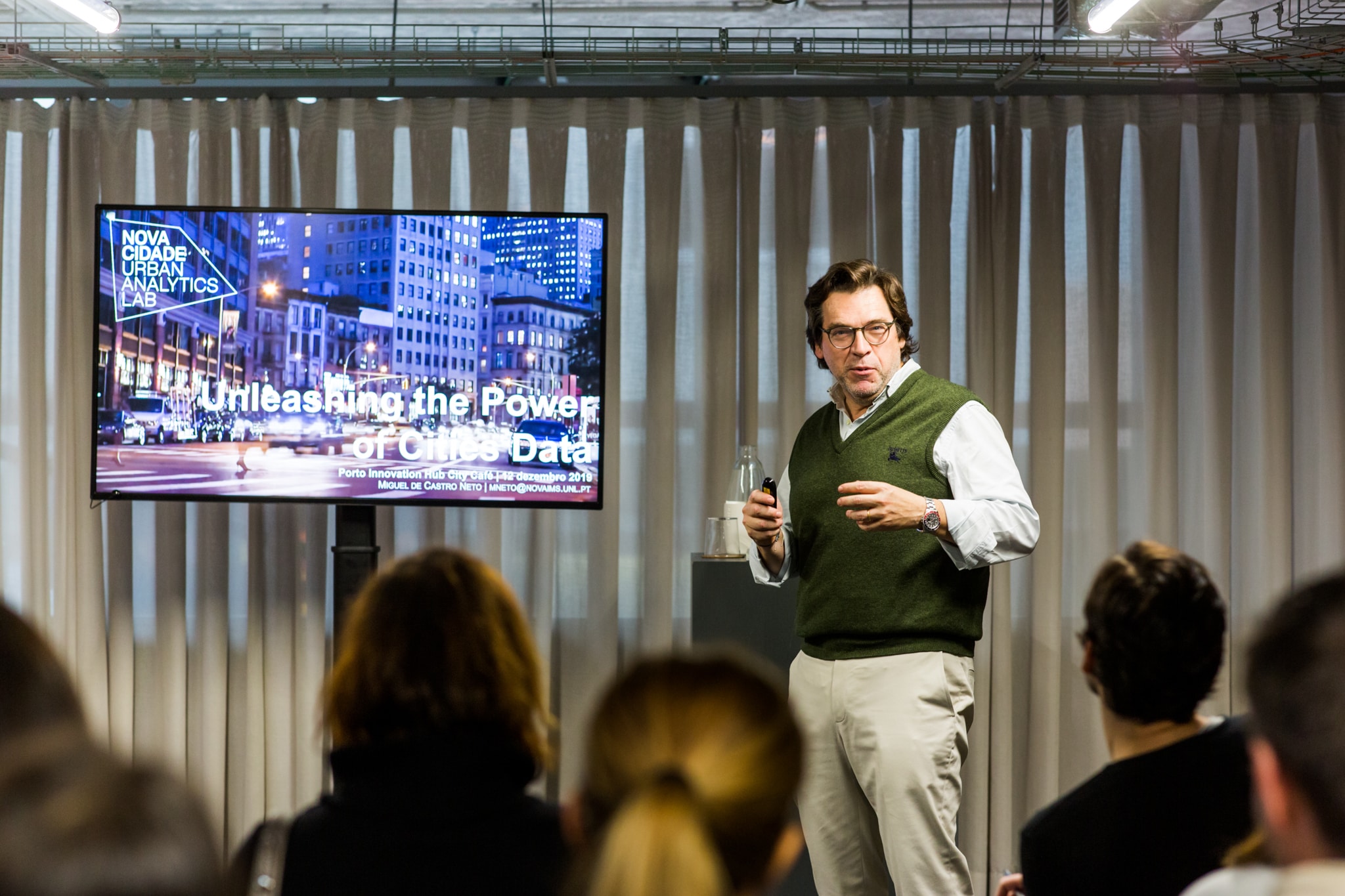 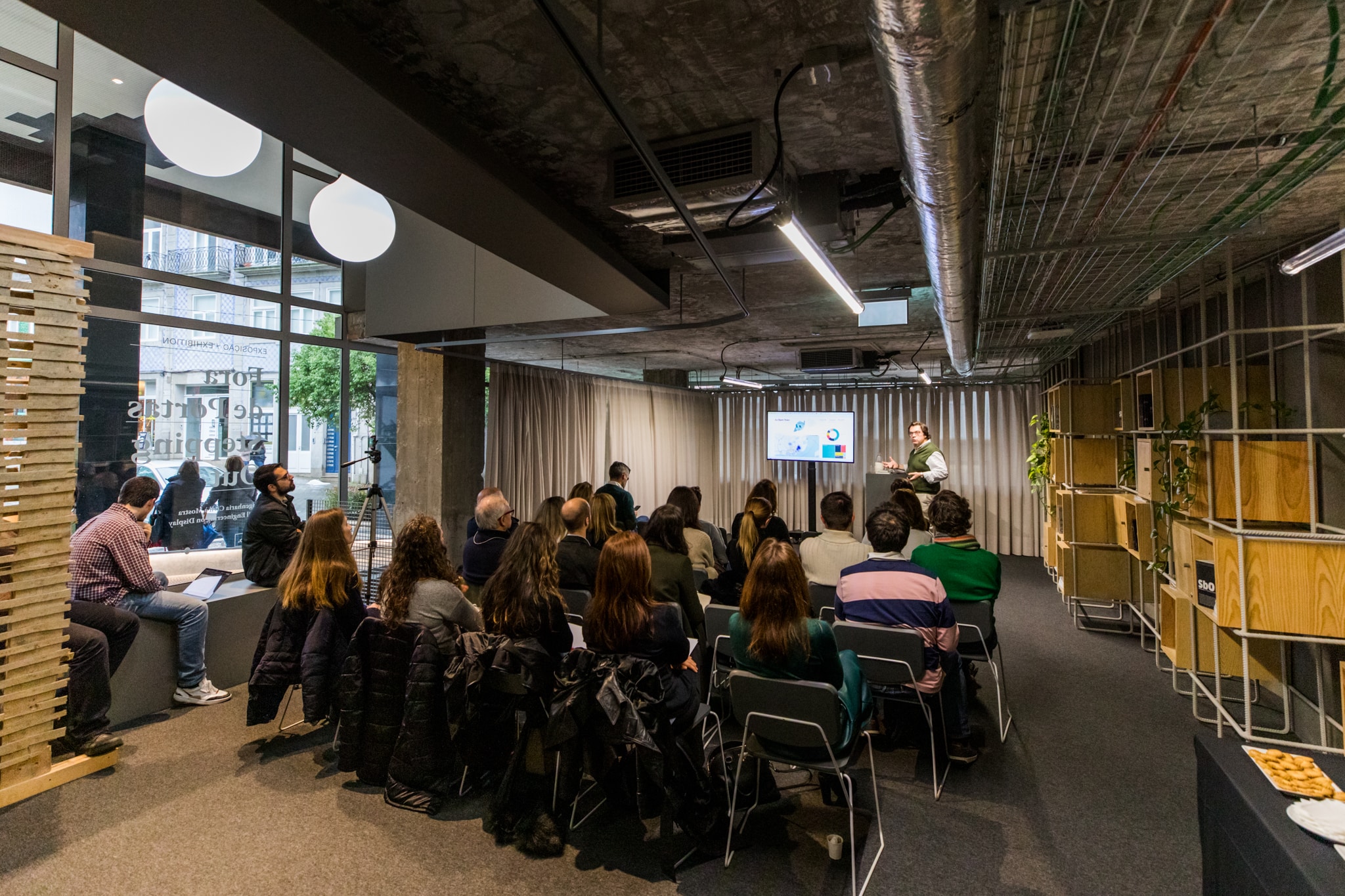 Miguel de Castro Neto, coordinator of NOVA Cidade: Urban Analytics Lab, was the guest of the last session of City Café in 2019, in a session dedicated to the theme “Unleashing the Power of Cities Data”.

Porto Innovation Hub has received, this Thursday, a new edition of City Café, the last of this year. This time, the guest speaker was Miguel de Castro Neto, assistant professor and deputy director of NOVA Information Management School (NOVA IMS) – New University of Lisbon, where he is also coordinator of the postgraduate studies in Smart Cities, ideal position for addressing the topic under discussion: “Unleashing the Power of Cities Data”.

“Data has changed the way we manage cities. However, this phenomenon should not be new to all of us, because in Portugal we have been training data scientists for 30 years. I think it is extraordinary that some people consider this new”, began the former Secretary of State for Spatial Planning and Conservation of Nature.

Miguel de Castro Neto devoted much of his presentation to the concept of “Smart Cities” and the impact that the realization of “smart cities” can have on the daily lives of citizens. This thesis was based on several examples and success stories.

“Contrary to what one might think, the concept of ‘smart cities’ is not exclusively linked to the phenomenon of digitization. Consider the case of the ‘Section of Smart Municipalities and Cities’ of the National Association of Portuguese Municipalities, which tells us that 140 of the 308 municipalities of Portugal already have political and technical leaders operating in the smart cities area. This shows us a clear tendency towards greater state concern about this need”, said the guest, who was also considered Smart Cities personality of the year by the Green Business Week/AIP Foundation in 2017.

According to Miguel de Castro Neto, more and more data, whether public or private, should be available, especially because “it can positively impact city management planning”.

“Being aware of this collective intelligence is also a relevant fact, because it gives transparency to the public and private are of a city and improves its efficiency”, defended the current coordinator of NOVA Cidade: Urban Analytics Lab.

In this chapter, “Portugal is a world leader” and is, for example, “the country that most uses the Participatory Budgeting mechanism“, a tool that people increasingly appreciate ”.

With regard to the challenges that must be faced in the coming years, Miguel de Castro Neto pointed as a priority a redefinition and prioritization of the public strategy of cities, taking advantage of various mechanisms such as, for example, public Wi-Fi.

“This tool is a great opportunity to get to know the city and the people who move there daily. The problem here is the challenge of captivating people to use public wi-fi more often than mobile data and roaming. For this it is necessary to think of a strategy that brings gains with this service, which is available for free”, said the speaker.

Finally, the session ended with the traditional moment of audience participation.

The City Café initiative promises to return early next year and aims to bring to Porto Innovation Hub one guest per month, in order to promote dialogue between the City teams and external experts.

According to a survey of the initiative’s satisfaction, City Café has largely responded to the wishes of the participants who are satisfied with this activity, as well as considering the relevant topics explored in their daily lives and their professions.

Among the main characteristics appreciated by the public, we highlight, above all, the informal approach of the topics under discussion, the relaxed atmosphere and the interaction with the presenter as the main positive points of the City Café. On the other hand, as suggestions presented, we highlight the need to present a larger number of practical cases and to recalculate the time of the initiative, which usually takes place at 13:30.

However, according to participants from previous sessions, everyone wants to return to the Porto Innovation Hub to participate in this activity again. Among the various themes suggested for future editions, we highlight “Innovation in Mobility and Transport within Cities”, “Team Motivation” or “Smart Cities”, among the most requested proposals.

Share This
© Câmara Municipal do Porto.
Back To Top
×